Our building is open for walk-in hours from 10:00AM to 2:00PM Monday-Thursday. Email, phone, & virtual services also available M-F.

Find this article at:
go.ncsu.edu/readext?700588
— Written By Ashley Troth

It might seem counterintuitive, but regular pruning is a great way to give your tomato plants the best start in life. Pruning helps maintain balance between vegetative (leaves and stems) and reproductive (flowers and fruits) growth, improves airflow to prevent disease, and can even help your plants produce larger fruit. Although pruning (along with supporting) tomatoes requires some work, the reward of larger tomatoes on healthier vines is well worth the effort.

One major benefit of pruning tomatoes is disease prevention. By removing the lower 6-12 inches of leaves you can help prevent soil-borne diseases from splashing up when raindrops hit the soil. Especially here in the Piedmont, these soil-borne diseases represent a major drag on our tomato plants, often leading to their early demise. By keeping leaves well above the range that raindrops splatter, you can help your tomatoes stay healthier longer. 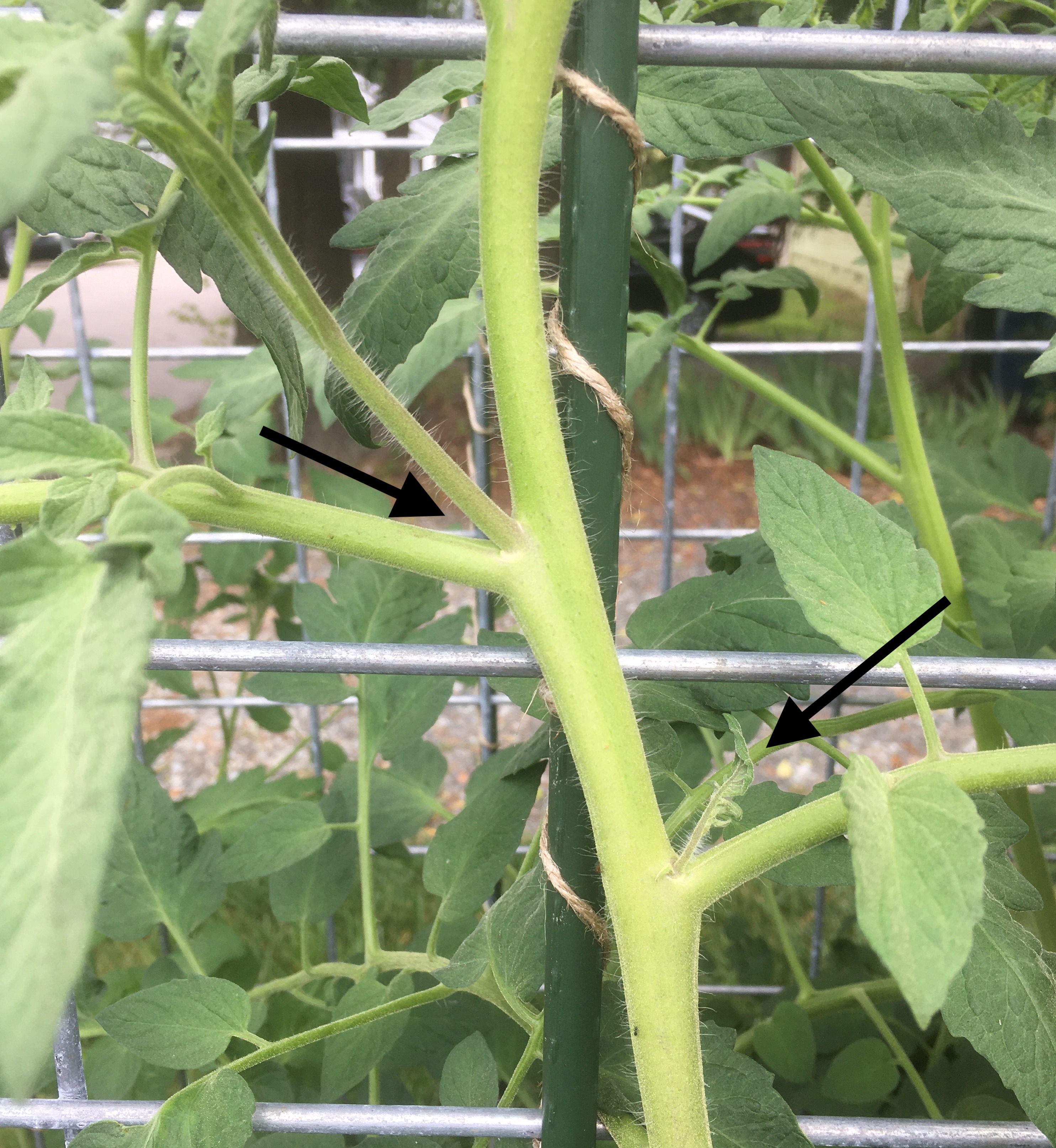 Beyond removing lower leaves, the two major types of tomatoes require slightly different approaches to pruning. Determinate, or bush, varieties of tomato plants grow to only about three feet, and then put energy into leaf and fruit production, allowing them to set large numbers of fruit in a relatively short period of time. The fruit will form on clusters between leaves and at the end of stems. Many determinate varieties require little pruning. The branches that form between the main stem and leaves, also known as “suckers,” can be removed from determinate tomato varieties to improve airflow, which helps prevent disease. This is less essential in determinate varieties than in indeterminate varieties.

Indeterminate varieties on the other hand are aggressive growers, often reaching eight or more feet long. These plants will ripen fruit throughout the season until the first frost. Many cherry and heirloom varieties are indeterminate. For indeterminate varieties, pinching suckers more frequently will prevent the plant from getting too heavy and becoming unmanageable.

The most common method of pruning is to prune to a one or two-stemmed plant by pinching off suckers as they develop at the base of each leaf on the main stem. For a two-stemmed plant, remove all the suckers up to the one immediately below the first flower cluster. Suckers should be removed when they’re small, no more than two to four inches in length. Allowing them to grow larger before removal wastes plant resources and the larger wounds create possible infection sites. When indeterminate varieties grow too large, the tops can be cut off to encourage lower growth, keeping tomatoes within easy harvest height.

To keep your plants healthy and producing good fruit, make sure to scout ripening tomatoes regularly, removing those that seem malformed, or have insect or disease damage. For both determinate and indeterminate varieties, be careful to not remove leaves that shade fruit. Tomato fruits ripen well when covered by leaves, and newly exposed tomatoes can often suffer sun scald. For the largest tomatoes, cluster can be reduced down to a single fruit or two. A central idea to keep in mind for most all fruiting plants is that a plant will likely produce a set amount of fruit-based on its overall vigor. A plant will produce either fewer large tomatoes, or more small tomatoes, so by removing ripening tomatoes from clusters, the plant is encouraged to redirect energy into the remaining tomatoes, making them larger. (Interestingly enough this applies broadly across the plant world, so pruning can often produce a smaller number of larger flowers or fruit.)

Remove and discard pruned branches and fruit somewhere away from your tomatoes and clean and disinfect your pruning shears before you prune another plant by dipping them into a dilute 10% solution of bleach water or alcohol. Prune early in the morning after plants have dried.

Want to learn more about proper tomato pruning? Check out these excellent resources: